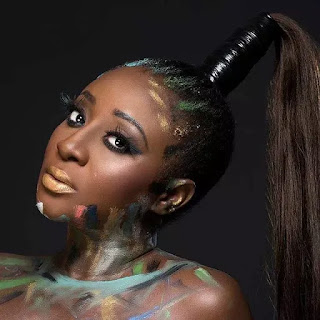 Ever since Ini Edo ‘s marriage went down the drain years back, not so much has been heard about her love life.The actress, who is currently a brand ambassador for a sliming tea, has trimmed down tremendously, despite the distaste people showed towards it.Ini never took to heart all the condemnation she received, as that didn’t stop her for going to her fitness class or taking her slimming tea.Recently, news is going round that the actress is three months into the nine months course every woman goes through already.
In recognition to her contribution to the film making in Nigeria, she was made a Glo Ambassador by the telecom giant Globacom. She is also recently signed a deal to be the Face of Chivita, the popular juice manufacturers. Ini is married to Philip Ehiagwina and loves reading novels, watching films and dancing in her spare time.Also, news of the father of her child is also unheard, but we anticipate more juicy details and we would keep you updated

ini-edo-1According to Niajagist.com, the beauty that has stopped attending fitness classes and social functions would be living the country soon.If this rumor has any truth in it, this only means Ini Edo has joined the Baby Mama’s group, as we all know she didn’t remarry.Iniekim Edo, popularly known as Ini Edo is a Nigerian actress. She was born on April 19, 1982 in Calabar, Cross River state, into a family of six.
She attended Cornelia Connelly College in Calabar for her secondary school education, and crowned it with a diploma in Theatre Arts from the University of Uyo in Akwa Ibom. She later went on to study for a full degree in English at the University of Calabar, Cross River State, Nigeria.Her foray in Nollywood started during a school strike, when she went with a friend to an audition. She got the role in the film ‘Child of Destiny’. However her breakout role came when she acted in the film, ‘World Apart’(2004) and since then she has not looked back, going on to act in more than 100 films such as ‘Games women Play’ Games Men Play and the sequel ‘Reloaded’.Ini opened a new chapter in her career when she executive produced a soon-to-be-released film, ‘Memories of my Heart’.

Photo of 5 months ago
I don’t regret walking out of my marriage – Actress, Ini Edo
Ini Edo said she is happy to have divorced her husband. Ini Edo got married to an American based businessman, Phillip in 2008.She allegedly walked out of the marriage in September, 2014 following accusations of domestic violence and cheating.the actress cited irresolvable differences and incompatibility as the major reasons for the crash of her marriage.Ini Edo said that closeness should have, may be, saved her marriage since her former husband was in America and she in Nigeria.She said, “May be being together would have helped keep us together. Because it would enable us study and understand each other more. May be it would helped but I’m not sure.

Photo of 2 months ago
Asked if her estranged husband was comfortable with her kind of job, she said, “He met me an actress and I believe he was okay with that.“Actually he complained. My work takes my time and interferes with so many things.“I tried to keep my [movie] roles as decent as possible when I got married. But naturally, there are certain roles you won’t be allowed to play. “Even when you are allowed to play them, you can reject them not just because of your husband but you got relations as well.Asked if her former husband’s family interfered in her marriage, she added, “He was the last child, so family members will try to see if their child is doing okay.

“I try not to regret [the time I spent in marriage] but I will say, it’s been an experience I have learnt a lot from. It made me a stronger person. It made me wiser and I think it actually made me more mature.”